Turmeric, the Golden Goddess is often called Saffron’s poor cousin. I picked this everyday spice for my comfort stew Turmeric is integral to my daily cooking – its been known to safely cure aches and pains Especially in cool weather flus and colds don’t stand a chance wit

1.   Soak black eyed beans for about 1 hour after washing. Then pressure cook. SOS tip – I’m not a huge fan of having lots of pots and pans, but one pot serves as an all round multi-purpose tool. The pressure cooker. This workhorse easily steams veggies, cooks rice, lentils, potatoes, and is energy efficient to boot. A crock pot works equally well.

2.   While Black eyed beans cook in the pressure cooker or crock pot, start slicing and dicing other ingredients. SOS tip- Worried about garlicky hands? Don’t be! The easiest way to peel garlic is to press clove firmly with a knife. Skin comes out easily without getting your hands messy.

4.   When onions are soft, add tomatoes & a pinch of turmeric. Let tomatoes cook till soft.

6.   OPTIONAL-if your stew is too spicy, let a potato come to the rescue. Peel, cube and microwave potato about 1 minute and add to stew.. SOS – What a forgiving ingredient. Potatoes will take in extra salt, extra heat anything extra. side benefit, adds creaminess.

7.   Let stew come to gentle boil. Sprinkle chopped cilantro, transfer to bowl, serve with any bread. I made some ajwain roti(carom flatbread). 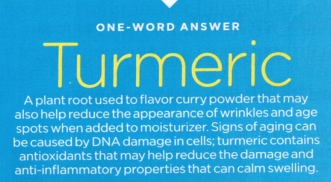 in her daily skin moisturizing routine. Hmmm. Whenever I’m on a bus to Mylapore for my music lessons, the sight of women anointed with turmeric for a glowing skin confirms this. Not only is it good for you internally, it also beautifies. I do have easier ways to add turmeric to your beauty regime that I’ve been using since I was a teenager -might share in another post:)

Health benefits
Curcumin is found in turmeric, a flavourful yellow spice, a key ingredient in South Asian and Middle Eastern cuisine. Turmeric has been used in India’s Ayurvedic remedies for 2,500 years. “We’ve shown that [curcumin] has well over 100 mechanisms of damaging cancer cells, particularly colon cancer cells,” said Professor Will Stewart, SOS -Thanks a lot for confirming with scientific evidence Professor!

Smart woman Thandie and scientific research may be on to something. Why shouldn’t you benefit from this powerful skin cleanser & all-in-one super spice in this recipe? Hope you enjoyed this nourishing stew. I’d love to hear your comments!