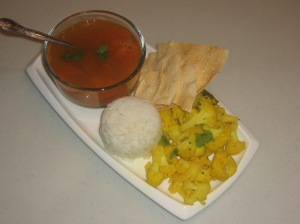 The crunch of mustard seeds, the fragrance of a spice mix that has endured centuries, the broth of juicy tomatoes and lentils, this colourful soup will lift your spirits, captivate your soul and nourish your body.

Today’s post is for my friend Alison who asked- Your posts are nice and I try out your recipes . But I want more—can you post a full south Indian meal? I want to be able to make that and I have no idea how.

Here then is a typical meal for a southerner.

I have to confess that Rasam(or tomato lentil soup) has been my favourite for years. Light, crisp & bursting with flavours its never heavy. It can be fiery hot depending on how much red hot pepper you add. But its a nice kind of heat, the kind that gets you breathing & alive again. It can be made in many different ways. I like the way my grandmother used to make it the best. For years I’ve been trying to duplicate her fragrant rasam. A tamil proverb talks about the cook’s hand making all the difference and I had sort of given up on ever getting it perfect.

To my pleasant surprise, today this rasam somehow became the best I’ve ever made. I’m not kidding: the fragrance, the texture & the appearance were ditto the original. It may have something to do with the heirloom tomatoes that I grew from seed & harvested from my yard. I wish there was some way for me to send over some of this fragrance wafting over my entire house. But this is the written word, so I’ll have to satisfy myself with writing about it.

Method
1. Wash and rinse lentils. Cover with water and add turmeric
2. Pressure cook till well cooked or you can cook in a crock pot.
3. Meanwhile in saucepan, dry roast spice mix. Let cool and then grind in food processor to a powder.
4. Chop tomatoes and set aside.(SOS – peeling tomatoes makes for a tastier soup. Dip tomatoes in hot water & then plunge into cold so peel comes off easily)
5. Heat ghee in saucepan. Add mustard seeds, let splutter and then add ginger and curry leaves. Toss once.
6. Add chopped tomatoes and salt and some water to cook. When tomatoes are cooked, add the powdered spice mix to saucepan. Let everything come to a boil so any raw smells vanish.
7. Add the cooked lentils, let come to a boil. Turn off stove. Garnish with cilantro leaves.
8. Serve with steamed rice.(SOS-l load the cooker with rice & lentils at the same time, to cut down cooking time)

Fun facts
This soup is called name of Mulligatawny and was featured in Seinfeld, episode 116 entitled The Soup Nazi. Jerry, George and Elaine go out to a new soup stand Kramer has been raving about; its owner is referred to as the “Soup Nazi,” due to his temperament and insistence on strict discipline while ordering. The episode repeatedly describes mulligatawny as one of the Soup Nazi’s tastiest soups.

I hope you enjoyed this dish just as much as I did preparing it and writing about it. There are so many good spices in it that’s its hard to pick one as the main spice. I’ll leave it to you to tell me what you liked about this soup……