No more spice talk! I have a german guest. He’s been wonderful and open about trying new foods.. its only the 2nd time he’s had indian food in all his life. So I want to go a little easy in introducing a stranger to indian spices. Even though you & I know how good they are & how they elevate food to heaven level  Shhh. Its our little secret 🙂
He’s been very open to culinary experiences.

I wanted to make a gift.

Shepherd’s pie, said a voice in the back of my head.

You don’t know how and you’ve never made it before, said the same voice in the back of my head.

Ha! stop! After yoga teacher training I’m a bit smarter now. I won’t be fooled by this voice of instinct alone.

I made this equation up after a particularly intense learning about instinct in my recent Sivananda yoga teacher training.

Ok, time for the recipe… the whole point was to tell you, my intuition won. It said you’ve been cooking for so many years. Its almost as if you were a cook in your past life. You know how to break down complex recipes.. and make them easy to do. So with the kind support of intuition 🙂 vegan shepherd’s pie was born. I want you dear reader to feel the same way about foods. Don’t hesitate to use another filling for this recipe If your heart asks for it. Listen to your heart!

Method
• Prepare kala channa – just leave out the cayenne pepper as this recipe is for mild taste buds.
With fork lightly mix in flour with coconut oil and enough water to make an elastic dough. I used about ¼ cup water for ½ cup Pillsbury whole wheat flour. Go slowly with the water for whatever brand of flour you decide to use. Don’t knead too much as you want the coconut oil to be a bit solid so that it spreads and melts during baking, giving the pie crust the right yummy texture.

• Roll out the dough on a flat surface with a rolling pin
• Spread parchment paper on 8” cast iron pan and pour kala channa on top. Spread it out.
• Place rolled dough on top and seal edges, fluting down.

• Make a few vents to let air out during baking
• Bake in 350 C oven for approx. 45 minutes or till crust is golden brown.
• Remove from oven. Let cool. Cut into wedges and serve with mango nectarine salsa (I’ll blog the recipe tomorrow as its late & my eyes keep closing 🙂 updated recipe blogged just follow the link.. 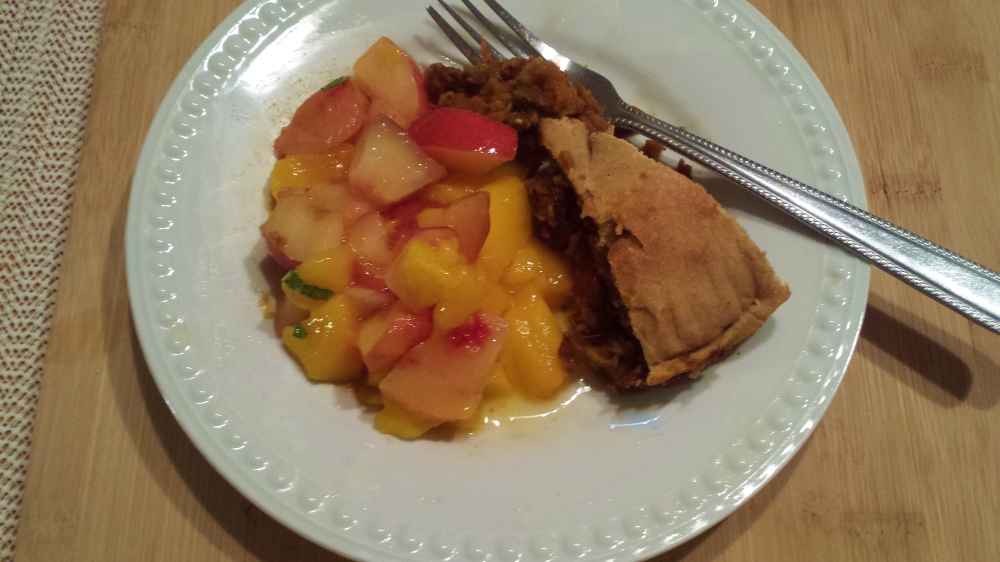 Apsara tip – the biggest part of this recipe is making the shepherd’s pie filling. Since I make everything from scratch and don’t use canned chickpeas, it just needs me to be a little bit more organized. But the end result – merveilleux !!! you simply can’t compare freshly prepared, no preservatives, no canned food with canned chickpeas. Since I wanted to serve the pie for dinner, I soaked the chickpeas in the morning, so that I could make the kala channa in the evening. See how simple it gets with a little bit of organizing.

Hope you liked this recipe just like my guest did. He got caught in the rain – we had a sudden rain storm in Toronto & since he’s an avid biker who’s biking across Ontario, he had to take shelter. He wasn’t really planning to eat this, but when he saw it he had to give it a try and was happy.

Would you like to be happy too 🙂 then try vegan shepherd’s pie for mild Europeans & see what Happy really means.