“Why, sometimes I’ve believed as many as six impossible things before breakfast.”
― Lewis Carroll, Alice in Wonderland

Then there are spices which heat up the digestive fire and spices that cool down the body.. Just looking at the array of spices spilling out of my cupboard is bound to make any Indian spice cooking neophyte dizzy with anticipation. I use spice based on the seasons, or a mood I’m trying to create for my guests or sometimes I’ll use the right spice for what a friend needs to heal.

So where do we begin? Let’s start instead from my spice box with its modest few compartments to hold just a few spices. 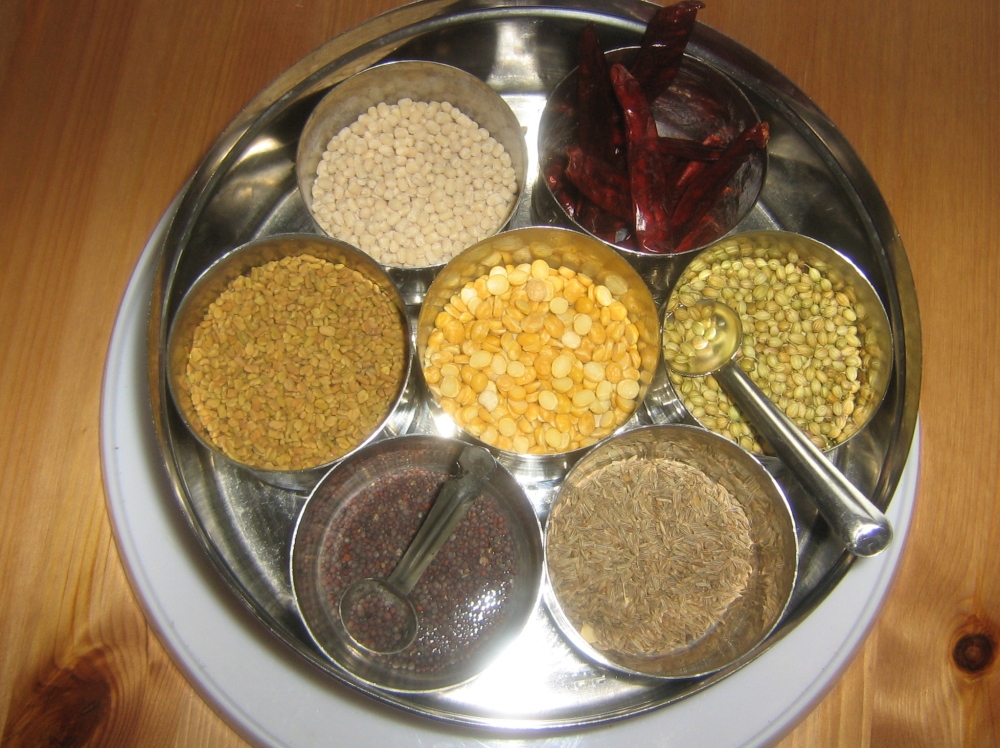 But wait, I’ve had several requests on a certain spice in the past few days, so this post goes out to all those readers who asked more about my #1 South Indian Spice Secret!

Why haven’t we heard more about this spice that delivers amazing taste every single time?

What’s so great about hing? Ayurveda, the Indian system of medicine values it for its pungent taste, as it helps to incorporate the 6 tastes of sweet, sour, salty, bitter, pungent and astringent into a meal.

Why this long name? Asafoetida – The name comes from  asa(Persian word for resin) + foetida(Latin for its strong sulfurous odour). Its called hing in Hindi.

Where does it come from? Hing is extracted from dried latex exuded from the stem and roots of a tree.

What foods is it mostly used in? This spice is a great marriage between culinary & medicinal use. Specially in South India, hing is a constant in the famous southern dishes using legumes (beans, peas, lentils), collectively known as dal in Hindi. Dal is a chief element of the Indian diet. Its not only a cheap source of protein, but also one of the few protein sources open to vegetarians. Even better, dried legumes are easy to store and have a long shelf life. However, being rich in indigestible oligosaccharids(what a long word:)), dals call for spices with major gas reducing action. Enter Asafetida, garlic and cumin to make dal both more tasty and easily digestible. I use hing in any dish that calls for lentils, legumes, and also in winter vegetables like cabbage, potatoes, cauliflower.

I use Hing almost always in southern Indian cooking and there are several reasons for this. Mostly because in sambhar, the southern soup’s main ingredient is the inexpensive lentil. Of course sambhar is chock full of vegetables & spices, but to balance and help digest lentils, hing is a must.

But what’s the real reason – The real reason I believe might have to do with temptation. Since several southern households steer clear of onions and garlic for spiritual reasons, the temptation is there to try these forbidden foods.. Enter hing which when added to hot oil does an excellent job of mimicking the flavour of onions & garlic. Such a win-win situation-combining health with taste 🙂

How to use – You’ll see most cooks adding just a pinch of hing and that’s all you really need. However timing is key. Add hing to hot oil to let that pleasant aroma arise. Add it to any food to help digestion, doesn’t have to be a lentil dish. Add it to potatoes cabbage, cauliflower, greens, lentils, pretty much any food and watch it come alive bursting with flavour. You can add it as the first spice though I caution against this. While food tastes great, your clothes may not. I prefer to add it at a later stage, not the first spice to hit oil but maybe the 3rd or 4th. Whatever the hing sequence, I do make sure to close my coat closet and any doors leading to clothing to maintain that professional touch at work!

Can I use other spices in combination with Hing? Absolutely. Just remember hing is the gracious star who’ll add flavour to your food, but also graciously step back to let other spices have their rightful place in your food. So go on ahead, don’t stop yourself from adding cumin, fenugreek or other spices you’re accustomed to in your hing flavoured dishes.

What is hing’s fragrance? Native to the mountains of Afghanistan, and mainly cultivated in nearby India, Hing has a pungent, funky smell when raw, but in cooked dishes, it delivers a smooth flavor, somewhat like leeks. Its hard to explain but I seem to remember someone saying it captures the essence of a southern indian village, and takes you there even if you have never visited it, here’s a way for you to experience my place of birth..

How to store – Raw hing is pretty strong smelling, it only gets mellow and pleasant when cooked. So in its raw form, dedicate a separate space of your spice box entirely for hing to prevent it from taking over all your other spices literally.

Where to buy – Indian grocery stores are your best bet.. But if you can find someone traveling to jaipur, and if you can beg and plead with them, maybe they’ll bring you pure hing crystals and then you can be totally gluten free in your legume cooking.

SOS yes Hing is that magical spice which tempts your taste buds in a way no other can, but the powdered variety is usually combined with wheat, that can be intolerant for gluten free folks. My advice for those of you who really want to try this spice, go for hing crystals if you can find this prized possession. This is hing at its purest with no wheat additives.

Hope you enjoyed this descriptive post on hing. I might share the dish I made tonight with hing starring in it, next time. But I do feel feel odd without sharing a pix at least ..  of tonight’s dinner!